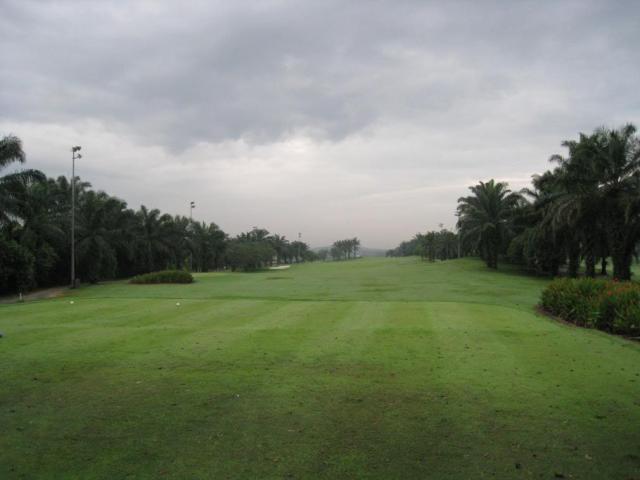 11 golfers turned out, the course was in pretty good nick, the weather very good and there were no hold-ups. The Winner with a gross 93 for 41 points, and cut 5, was Bernhard Romahn.  Second place with a gross 95 for 40 points and cut 1, was Ian Geekie.  Kevin played very well for the days lowest gross of 89.  And Mike Hughes enjoyed the most golf with 109. Full results:
Bernhard Romahn – 93/41
Ian Geekie – 95/40
Tony Morris – 97/35
Klaus Kretschmar – 95/34
Kevin Wiggins – 89/33
Andrew Robinson – 92/33
Tom Holmes – 101/33
Reinli Tan – 93/29
Mike Hughes – 109/26
Vincent Vijayan – 108/25
Ray Funnell – 104/25
There was some uncertainty after the game as regards whether or not Barry was going to show up and lead us to a local hostelry for F&B…  In the event we stayed at the club and the food was rather good.  And on the subject of Barry I received a rather odd email from him the previous week after the announcement that we would play at Awana Genting Golf Resort – too far to go, would need to stay the night, blah, blah.  I transpired that he thought Awana Genting was up in the Cameron Highlands!!  Clearly ‘Genting’ did not provide an adequate enough clue at to the location of the course…….former captain of industry, and all
Another worthy mention was the flight spearheaded by Ian – and submitting a dogs breakfast of a scorecard.  This because nobody in the flight was quite sure how to work out the Stableford points……..?
And a deserved mention must go to the beer consumption which amounted to one mug of Carlsberg and one bottle of stout – between 11 thirsty golfers…..
With yours truly off to London this week adn Mike still unable to swing a club the subject of appointing a new Pro Tempore Cannons Convenor arose.  There was much naval gazing, ‘I’m going to be away’, ‘I’m got to go to the bog’, shoe lace inspections and so on. And then Mike Hughes saved the day by saying he would be delighted and honoured to do it for a few weeks.  Thankyou Mike. So WOULD MIKE S. PLEASE UPDATE THE STATS FOR THE LAST COUPLE OF GAMES AND FORWARD TO MIKE H. ALSO GET THE JULY MONTHLY TROPHY TO HIM.  Thankyou.
Kind regards
Andrew Robinson
Ex Pro Tem Cannons Convenor