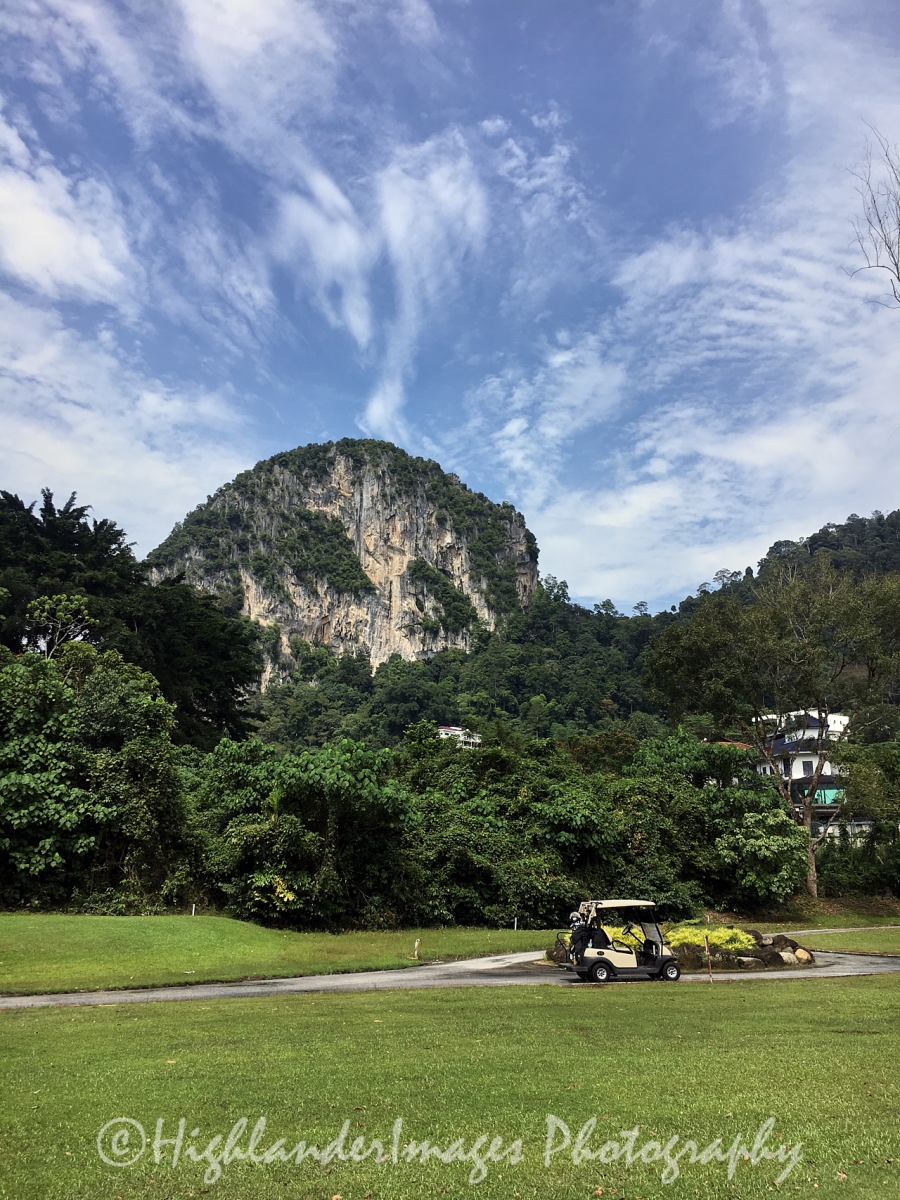 The monthly trophy game for November was held at Templer Park Golf & Country Club. The morning was very rainy and it was a much delayed start when our 4 flights eventually tee’d off from staggered tee boxes at around 9:30am or so. The course although wet and soft in many places was in good shape with the greens in excellent condition. Scoring of course under these difficult conditions were down as expected.

We ended up with 17 players due to a miscommunication/miscount by Bernhard who arranged the game but Ray Funnell kindly dropped out to allow 4 full flights to play.

We all finished by around 2pm and had a late lunch at the club. We were joined by our Convenor, Hans Berger, who came along to present the November Trophy award.

Kevin Wiggins kindly donated RM300 to the pot today to celebrate his recent 300th game … many thanks Kevin!

The winner of the November Trophy was Bernie Schobert with a score of 90 for 32 points beating Peter Davies (96 for 32) on count back. Bernie didn’t stay for lunch so he will be passed the trophy later – we all enjoyed the benefits of his RM50 winnings which went into the pot. Best gross of the day was Paul Geddes with an 87. Full scores below: 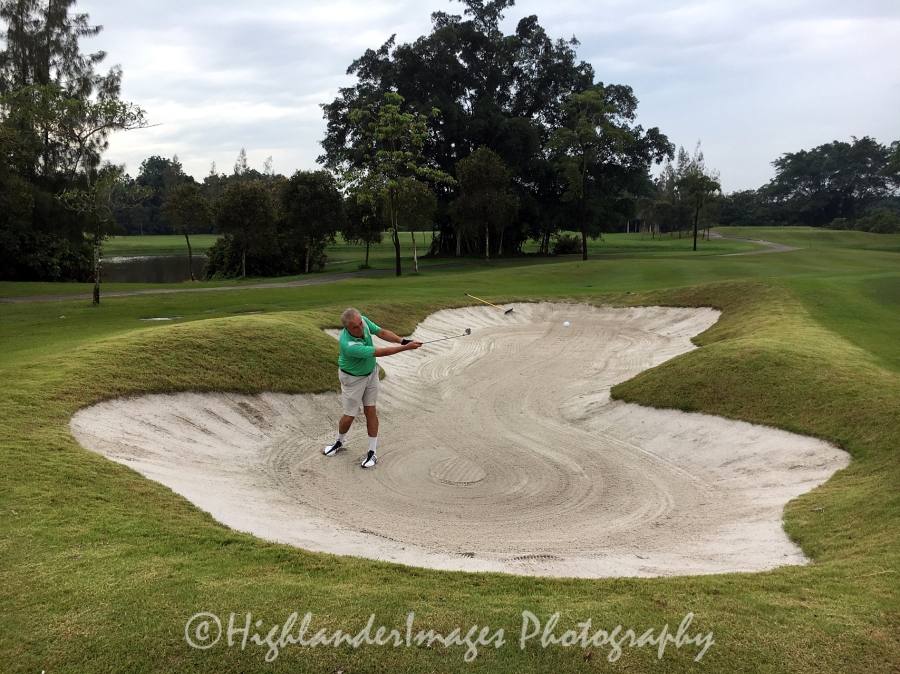 Despite a torrential downpour one hour before tee-off we managed to tee off at 8:00am under wonderful cool conditions. The course was in remarkeable condition condition the deluge and the greens were the best we have seen for a long time. Buggies were restricted to on-track as some of the course was a little wet and soggy but overall very playable.

We welcomed back Andrew Barber who joined us today (last appearance was somewhere in 2014!) and Stuart Taylor returned from his 7 week vacation. The course was relatively quiet so we were all finished by 12 noon and then had lunch at the usual restaurant over the bridge at the entrance to Pulau Carey.

The winner today was bernard Romahn with a score of 82 (best gross) for 39 points with runner up Mike Williams on 83 for 38 points. Full results below: 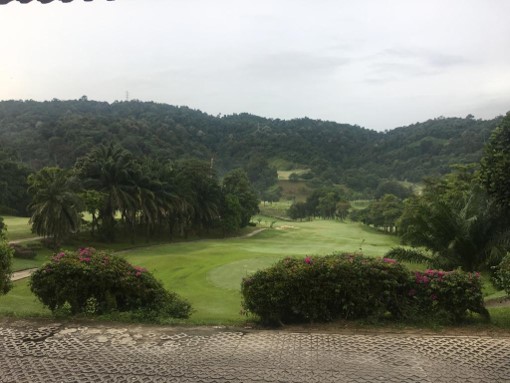 Bukit Unggul a controversial course as we all know. Some hate it some like it (from what I saw today the majority). Anyway Bukit Unggul will always be a course for a heated debate. It was a good day for golf, everybody was in time, registration went smooth. Take off was something else. There is always people that are afraid missing the last bus and they were in our group unfortunately. Taking off before their turn and starting at the wrong t-box……………..why is it so difficult to just wait 5 more minutes and show some courtesy towards others in the group that are waiting for all to start as listed? Graham thanks for the apology, very much appreciated!

The course itself was in reasonable good condition, some greens a bit too sandy, a wild bore digging here and there but otherwise fine and not too wet at all.

Today’s winner Dave Evans put a marvelous 40 on the board despite producing the shortest t-shot with a driver I have ever witnessed; a 1 meter shot on hole 13. Mike came in 3rd with a 38 and the 2 guys running for the last bus to catch shared 2nd with 39.

Post game lunch was consumed at our regular hangout East of Highway with the usual Tigers going down and some good food. Thanks to Ray who contributed generously to celebrate his upcoming birthday.

12 Loose Cannons played a very soggy Bukit Kemuning Golf & Country Resort today, as Tuesday was Deepavali.  Despite tee-ing off at ~7.30am, because the course was apparently heavily booked, the 3 flights were taken to the short par 3 Hole #13 and Flight 1 teed-off from that hole.  However, the starter took the other 2 flights on to #14 so they both teed-off from that hole, putting flight 1 behind the other 2 flights !  This was then compounded when we crossed over to #1 where other flights were waiting, so that another flight was introduced between our flights 3 & 1.  Anyway, we eventually all finished around the same time, after a rather slow round.

After heavy overnight & recent rain, the lower parts of the course were very water-logged, with a lot of standing water, and some bunkers were more like lakes. However further rain, which threatened towards the end of the round, held off so the more elevated parts of the course, played later, were generally drier & better.

Despite these conditions, scoring was generally good.   The winner today, celebrating his birthday, with a lowest gross of 81 for 40 points, was Ricardo Castro. Second was next week’s convenor, Martin Belderink & third, the late Bernard Romahn!

Ten of us then adjourned to our regular O&S Seafood restaurant, where we were joined by Barry Cousins, now sadly retired from regular golf.  The restaurant was very busy, presumably post-Deepavali, so the food was a bit slow to arrive.  Luckily the beer arrived much more quickly and overall the meal was relatively inexpensive, and helped by a Rm200 birthday contribution from Ricardo (thanks !). 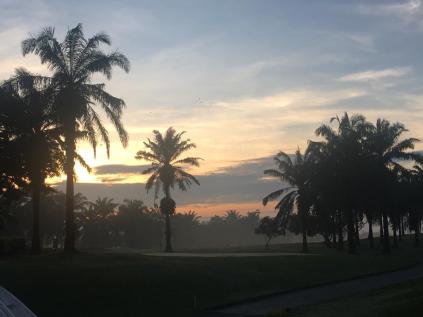 All 18 players managed to turn up on time for an early tee-off for the October Trophy game at KGSAAS on a cool and thankfully dry morning — thank you from the Temporary Convenor.
We welcomed back Andrew Robinson and Charles Blanchet after prolonged absences.  Check-in was a breeze – they are well organised here and easy to work with, and flights had been emailed to them in advance.  Sigi very generously paid the full fees for his flight and donated his partners fees towards the lunch bill — thank you very much Sigi !!!!
The course was not too busy and we were away well before 8am with split flights on the President and Sultan nines.  The weather soon became steamy and humid, and there was a lot of moisture on the greens and fairways.  Overall the course was reasonable considering it is the wet season – and all courses are currently a bit soggy.  Greens were fairly true and the fairways playable.
Most flights finished around mid-day with one flight delayed to 12:50 after being caught behind a couple of slow groups.
Attention Stuart – for the handicap record – Andrew Chez and Peter Barker played off the blue tees.  All others played whites as usual.
Winner on the day with 37 points was Ricardo – well done to him – the only player to beat his handicap.  Hans Berger joined us for lunch and presented Ricardo with his Trophy.  Second place was Bernard on 35 points and third was Stan with 34 points – well done guys.  Lowest Gross was 83 by both Andrew Chez and Ricardo, and most exercised was Dave.
14 cannons stayed for lunch washed down by some very welcome jugs of cold beer.  Bernard, Berni and Tony stayed for a while at lunch, but Ray unfortunately had to quit the golf after 9 holes due to flu/fever symptoms.
The surplus funds from the morning, coupled with Hans’ members discount card, covered the whole of the lunch bill, which led to raucous cheering and a few shouts from the cheaper seats of “we love Sigi”! 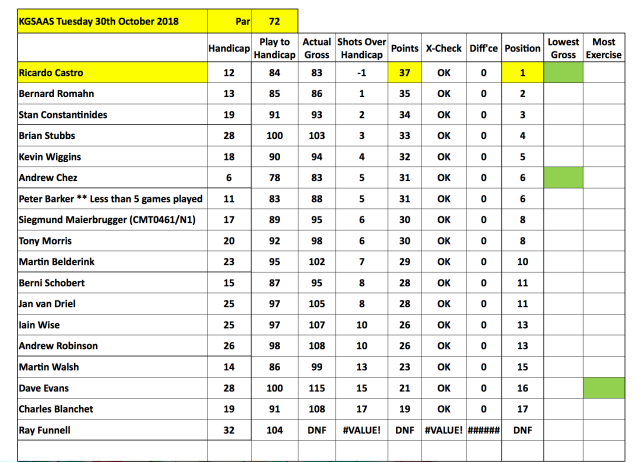 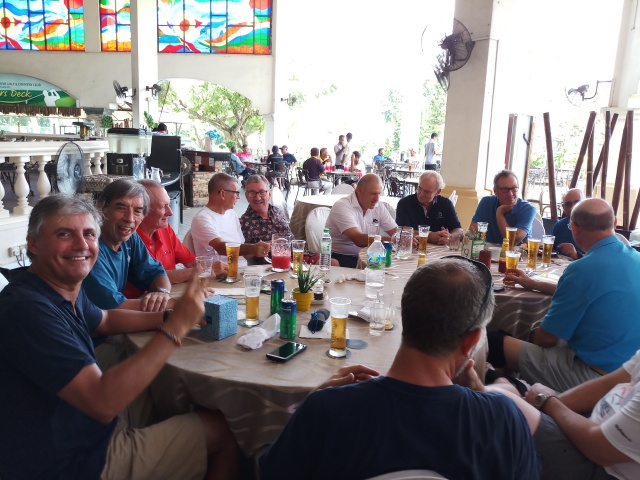 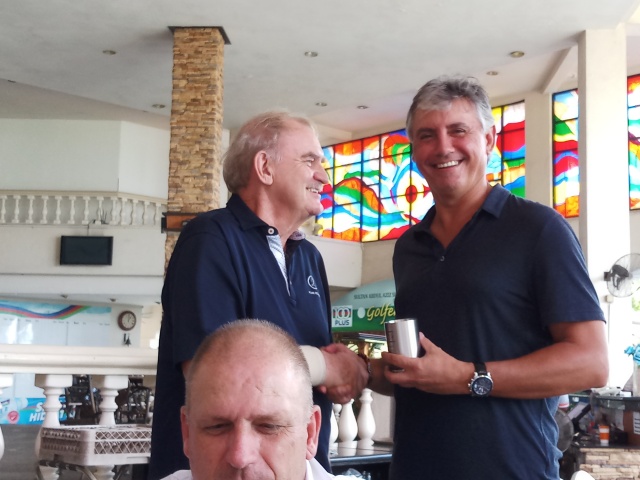 In the end we started with 15 players.. One drop out late Monday afternoon.

Teed off early  at 0740 from 2 tee boxes. Putera and the Tasik 9.  The weather was good , light cloud and a little breeze. The course was a little wet in places after the deluges of the past 24 hours and buggies were on track. All considered the course was in good condition. Greens were good although the Putera greens had been fertilized and a little slower.  13 players stayed for lunch at the club and a few jugs were consumed.

The winner on the day and with the lowest gross of 78 was Bernie Schobert with 45 points. There was a light hearted discussion regarding his H/ Cap…..!  The next 4 players were all within 1 point.