Palm Garden Golf Resort has to be one of the best golf courses I have had the pleasure to play……anywhere. Truly superb.

Designed and constructed by LC member Ted Parslow this is another example of Ted’s amazing talent and must rank as the equal to KLGCC, if not better.
Thanks to Ted & Geoff Parslow Loose Cannons were invited by the IOI management to play this masterpiece ahead of the official opening and 24 LC’s took up the challenge and a challenge it was. The course is not long, 5780m, and for this reason we played from the Blues but with the steep elevation changes and the enormous amount of beautifully landscaped water features it proved to be very challenging indeed as can be seen from (most of) the scores. The playing surface throughout was pristine with hybrid Zoysia fairways and undulating and deceptively fast Bermuda Tidwarf greens. The bunkering is spectacular in appearance but very playable thanks to the grade of white sand used and the shaping. Fantastic.
The winner, making a rare appearance with us since his return to gainful employment, was Tom Holmes with an outrageous 47 points. The runner up was David Hughes with 39 points. The lowest gross was 81 by Geoff Parslow (this gives you some idea of the degree of difficulty) and the most golf played was 121 by George Murray just returned from several months away.
Tom is cut 11 strokes and David 1 stroke.
The full results can be found in the attachment.
Apres golf M&M was taken at the club house which like the rest of this resort is brand new and of very interesting design. The service was a tad slow due to the ongoing training of the staff but the food, when it came, was good and not too pricy. There was a minor altercation over billing of unpaid breakfast bills but this was resolved without problem.
Soon after we finished the heavens opened big time and Ted was able to witness the drainage of his masterpiece from the veranda of the restaurant which overlooks the course. This was amazing. The 18th green was completely flooded yet within minutes of the rain easing up, not stopping you understand, just easing up, the water just vanished. The other point of interest was that the sand in the bunkers stayed in place on the steep slopes with no water collecting in the bottom of the bunkers.
Once the heaviest rain eased up some made a run for it including Kevin. Some 15 minutes later Kevin reappeared in the restaurant looking like a drowned rat. Soaked to the skin he explained that he followed the temporary access road but found a section flooded. Thinking the water to be shallow he drove on but was quickly afloat! Others in 4×4’s passed him, their bow wave making his predicament worse. Abandoning his car he walked back to the clubhouse through returning heavy rain. Later his car was retrieved by the IOI staff less it’s number plate which I believe Jeff has. The floor mats are no doubt drying on Kevins veranda as you read this.
This was David Hughes last game for a while and he generously presented the winner with a bottle of single malt. Bon voyage David and see you next year. 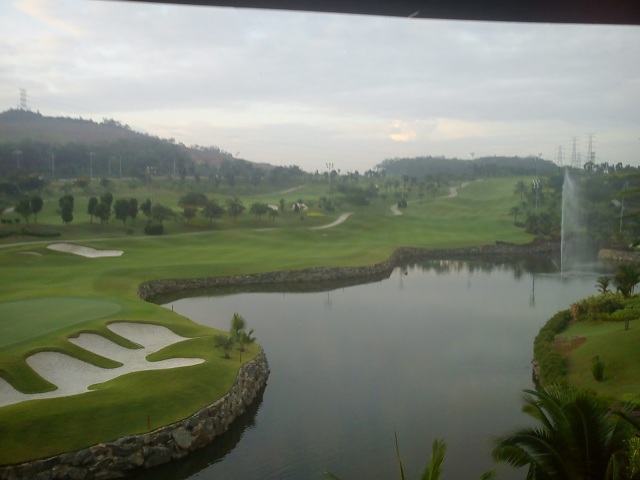 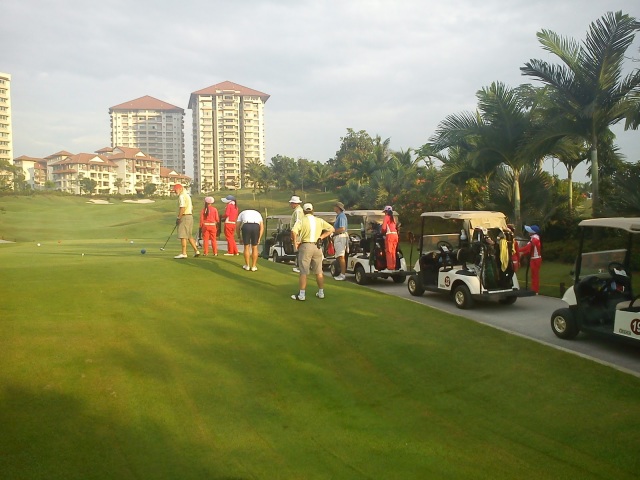 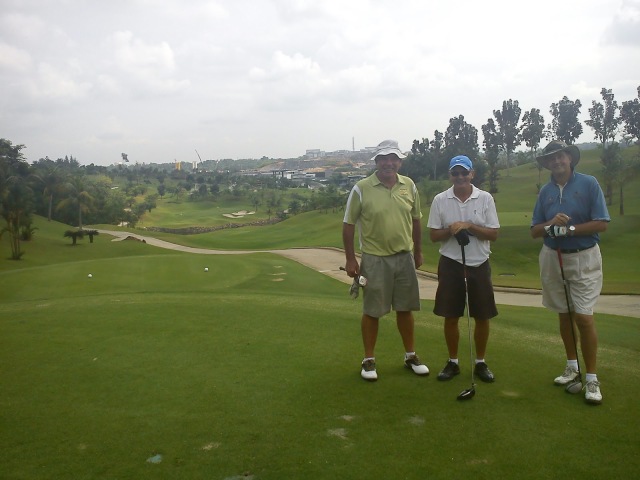