We haven’t played Bukit Unggul since May, mainly because it was in pretty poor condition back then and the M&M service was very slow. Not a lot has changed in the interval. Granted, the course was generally in better shape than previously( the dead tree at the 18th tee box has been removed at last) but the time it takes them to prepare a simple meal is unbelievable.
There was a rush to get onto the first tee ahead of a large group of Chinese seniors; the orange & white shirt sociaty that we increasingly see on a Tuesday lately, who can be horribly slow, and so the 12 LC’s assembled were directed to the back 9 and with no one ahead we were all round in well under 4 hours. Thanks to Ray for taking care of the registration.
Bukit Unggul Golf & Country Club has so much going for it in terms of location and layout that it is almost a crime that it isn’t better managed and presented. It really wouldn’t take much effort to turn it around. They are doing some work to repair kerbs and drains that have lain in disrepair for years, and some of the buggy turning areas that were so ineptly laid a few years back have been extended, not in matching paving you understand but at least a buggy can be turned around now.  But there are still areas on the fairways and their fringes that are completely bare. This can be repaired so easily with just some turf! Of course, when you see the majority of the ground staff sitting under trees doing FA, only stirring from their stupor when when an opportunity to sell a few balls occurs, there is little that can be achieved on the maintenance front.
What a pity.
In a nut shell, the greens were OK but slow and many had patches of damage that had only been sand filled rather than turf plugged. The fairways were average at best and the bunkers were poorly maintained. Out of 10 I would give it 6 at best. But it’s cheap and fairly close to town.
The weather was excellent and a stiff breeze that arrived about half way through meant that we all walked off the course almost dry.
The winner  was myself with 40 points and the runner-up was Andrew Robinson with 38 points. The lowest gross was 85 by Andrew and the most golf was played by Allan McNicoll with 124. I am cut 4 strokes and Andrew 1 stroke.
All 12 of us took lunch at the club house but as I said earlier, the service from the kitchen is so slow that some of us actually visited the kitchen to find out what was causing the delay. 45 minutes seemed about the norm from the time of order to receiving the dish And we were the only ones in the place. Hello!!! The only good news was the bill which left us with a surplus to go into the kitty.
Photos 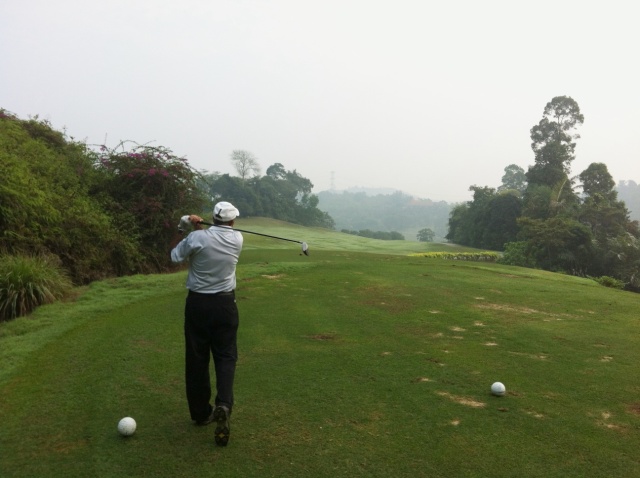 Aftab Ahmad tees off into the mist.

Ray Funnell making it look not so easy.

The wild boar had been at work in many places all over the course this being a prime example.

The sun trying to cut through the morning mist and cloud.

A panoramic view over the course.

Bukit Unggul course is located in a very scenic hilly location … if only the course was in better condition.

A new hazard …. a bunker on the green! No the guy who was cutting the greens broke a hydraulic hose on his mower and spewed oil over the green …. this was his repair job!

Vincent looks in vain for his ball which had disappeared into this grotty drain. 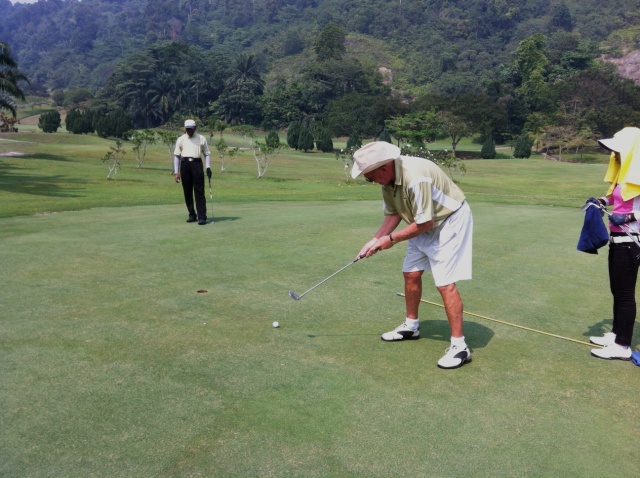 Ray having the putting yips again.

Ray and his trusty caddy.

Ray manages a smile despite the putting blues.

Another scenic view over the course. 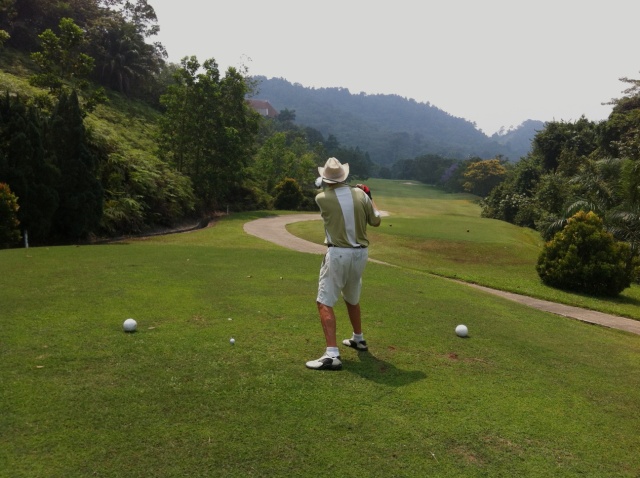 Vincent blast one away on the last.

The Amber Fluid Team make up for fluid loss and await the lengthy time for makan to arrive.