Skip to content
Cannons all,
A rather belated report this week because I went outstation almost immediately after the Kinrara game.
Since our last visit to this track much work has been done to the club house which is now superb and there is plenty of evidence of renovation of the course as well. The new tee boxes are very nice and if they get the greens relaid then Kinrara will be one of the better courses in town.
15 LC’s teed it up on a fine morning but we had to follow a bunch of elderly locals for much of the round which slowed things up some what. Still, we were round in just over 4 hours so not  too bad. The fairways were a little soft in places and in need of a haircut. The greens were very variable both in pace and in condition and need a lot of work or better still replacement. The buggies too have seen better days. Did they get these from BU??? But all in all this is a nice and convenient place for a game of golf.
The winner was Andrew Robinson with 43 points OCB from Erol Akinci. Geoff had the lowest gross with 81 and the most golf was played by Raymond with 113.
Andrew is cut 7 strokes while Erol gets away with just the mandatory 1 stroke.
The full results and your adjusted handicaps can be found on the attachment.
The M&M was taken at The Annex which was up to it’s usual good standards. I had to leave early but the wine was flowing nicely by then.
During lunch plans were laid to play KDE next Monday and then go to Ma Maison for their very good buffet lunch. We had tried to arrange this once before only to find that Ma Maison closes on a Tuesday. Well guess what. KDE closes on a Monday!!! The best laid plans ……
So we will play Bukit Unggul next MONDAY instead. Monday because several of us will be playing KLOGS on Wednesday and can’t find the energy to play 2 days running anymore. 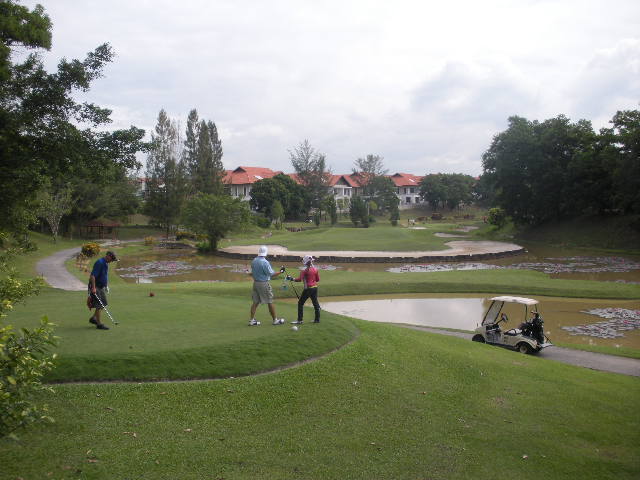 Rumour has it that this course will soon be turned into a sheep farm. Indeed there is evidence that preparations have begun already!!!

In the meantime have a look at a few of the changes!